Night Flight and Other Journeys 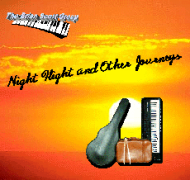 Night Flight and other Journeys is Passage lite. That is to say, the songs are instrumentals but are more accessible, the tunes more catchy. Many of the songs were recorded at the same time as Passage and feature some of the same exemplary musicians. I took some of the solo piano pieces (e.g., Eastern Point Light) and electrified them, so to speak, and some new material.

Night Flight to Rio features a cooking Ron Holloway solo at the end, and is one of my favorites. I had the pleasure of having that song debut with an arrangement and performance by the Southern Maryland Community College Latin Ensemble under the direction of Stephen Johnson. Zendo Dancing is a playful concept emanating from the visit to the Zen Monastery (zendo being the very serious meditation room) where in my mind the monks break into spontaneous dancing after the watchful Sensei is temporarily away. I should crowd fund a video! Love the melody and execution of Song for Susan, especially the coda with the sympathetic flute and vibe solo at the end (played on the keyboard). I honestly don’t know who Susan is, I needed a two syllable sound to remember the melody (think Paul McCartney’s “scrambled eggs” working words for “Yesterday”) and that worked as good as any. Had some explaining to do with my wife, Karen. Two syllables there too. Susan is my ‘every woman’ an amalgam of those who came before, those I know now, and those yet to come. Works for me! More